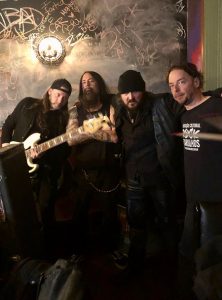 Dan Lorenzo selbst sagt: “I can’t tell you how excited we are about what we have so far for the 4th Vessel of Light album.
I thought I had finished writing before the corona virus lock-down, but during this time I wrote the music to four new songs that are four of my favorites.

Since we released Thy Serpent Rise I’ve recorded most of my guitar parts to 16 new songs and
Ron Lipnicki has already recorded his drums to 14 of them.
Jimmy Schulman should have his bass lines finished by the 4th of July and Nathan Opposition is already well on his way to finishing up lyrics/melodies to half the album.

Nathan and I only met in person for the first time 3 years ago and since then we’ve written about 40 brand new songs together.”