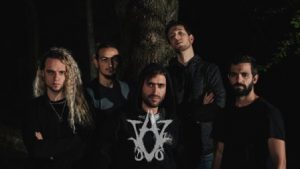 Die italienischen Death Metaller um The Big Jazz Duo veröffentlichen das offizielle Video zum Song Red Pyramid aus ihrer hochgelobten EP Scion – Soothsayer. Direkt zum Video kommt ihr HIER.
Aus dem Pressetext: ““‘Red Pyramid’ takes its name from Pyramid Head, a fantastic creature made famous by the videogame saga of Silent Hill. If in the saga he represents a judge, a punisher, in our passage he plays a similar role as a symbol of Samael’s revenge against his followers; the God, resurrected and reincarnated in Valtiel, returns among the living to fulfill the prophecy and unleash the apocalypse. However, the video tells the background, or the inner dissension of the head who, tormented by visions of death, decides to flee leaving the coven; however, he is discovered and imprisoned, accused of high treason and finally sacrificed in the same way as through prohibited rituals, the Gardeners slaughtered innocent on the altar as an offering to their divinity” the band says “Is a song characterized by heavy and violent rhythms, alternating with a Swedish matrix riffing, trademark of TBJD. The orchestral part is overpowering in the breakdowns, giving that Symphonic Deathcore touch to a style that would otherwise wink at old school death metal. The final part of the piece explodes in the angry revelation of the God ready to unleash the carnage, in an amalgamation of growl, atmospheric sequences and drums passages perfectly planned to tell the catastrophe”