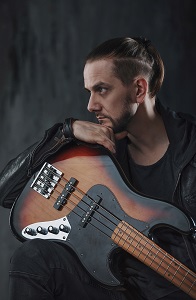 Mariusz Duda, den die meisten aus seinen Projekten Riverside und Lunatic Soul bereits kennen, veröffentlicht nun die erste Single seiner Solo Karriere aus dem Reigen Subcutaneous songs. Direkt zum Song geht es HIER
“The world is changing right before our eyes. Irreversibly. It has forced us to stop, take shelter, lock ourselves up in quarantine, and stay on our own with our thoughts. Will it influence us and change our attitude towards life? Certainly. The question is: for how long? It would seem that, in spite of slightly bruised psyche, we’re still strong, mighty, indestructible and, surrounded by state-of-the-art technology, still convinced that we can’t be taken by surprise. Yet the recent events have demonstrated that we are fragile and vulnerable. And now we’re opening ourselves to new realms of sensitivity, something we would never have thought we were capable of. For quite a while now, I have had a growing need to create compositions meant exactly for such realms. I call them “subcutaneous songs”, songs that cling to you, songs “about a sad smile”. I have also realised that what I needed for those songs were lyrics that would somehow refer to ecology, our dying mother earth and also our willingness (hopefully) to change our ways and fight for the planet we live on. “The Song of a Dying Memory” talks about how, despite our progressive amnesia caused by the intensity of life, we still love what was important to us and “somewhere yesterday” we still have something to go back to, a starting point that would spark a change and inspire us to find solutions to our current issues. From Aesop’s fable “The North Wind and the Sun”, I choose the Sun. I do not want to blow in your face, point my finger and say, “You are naughty because you’re not taking care of yourself and others”. I believe that each of us has much more good than bad inside, a lot more love than hate. “The Song of a Dying Memory” is the first from the cycle of „Subcutaneous Songs”, which I will be releasing only as standalone Digital singles. To me, an avid fan of concept albums, this is a completely new form. But thanks to it, I will be able to start a new music project, a new part of my music universe, which you can explore in its entirety here:www.mariuszduda.md I hope that at least for some of you the song will make it easier to wait for better days. Enjoy it, stay safe, stay well.”, so das Statement von Mariusz Duda
Textquelle: Pressetext