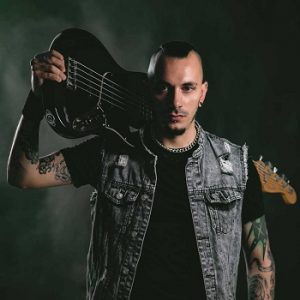 Über den Künstler:
“2016/19 has seen Lucio as busy as ever both live and in the studio with the band ‘Tamurita’ produced by Joxemi (Ska-P) and SP Produzioni.

He recently created and produced the new single ‘Tu Sei’ and shared the stage with ‘Creedence Clearwater Revived’ for their ‘Sardinian Tour’, Max Pezzali, Punkreas, Lo Stato Sociale and more. He has continued with clinics and master classes in Sardinia with the collaboration of several private schools. The videos taken from his last solo album ‘An Old Man’s Sad Story’ have been supported, sponsored and shared by many influential pages and sites from the music community all over the world including ‘Bass Love, Bass The World, Bass Musician Magazine and Vic Firth’. Now as a recording artist at ‘Got Your Six Music’ UK he has been sought after for his talents as a session bassist for other band/recordings worldwide.

Lucio Manca is currently working on the production of his third anticipated solo album along with the new Casus Belli album that will both come out later in 2020.”